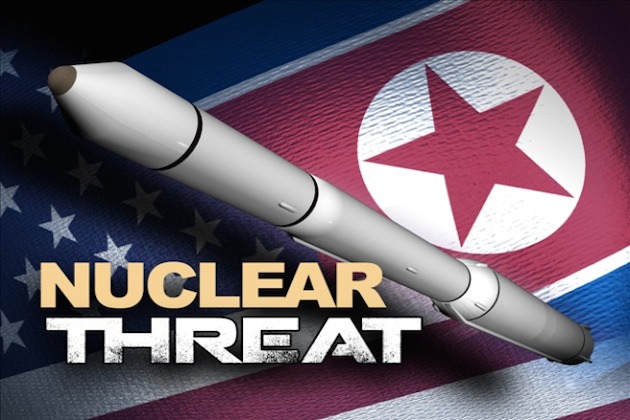 SEOUL, South Korea - North Korea says it is preparing for a preemptive nuclear strike against the United States.

The country says it has switched the status of its military from defense mode to attack mode.

The deployment by the United States of three B-52 stealth bombers to Andersen Air Force Base at Guam earlier this week has unnerved the North Korean regime which said Saturday the deployment was preparation for a planned nuclear strike on North Korea.

The government said if it it sees any sign an invasion underway it will launch a nuclear strike against the U.S.

The Yonhap news agency based in Seoul in South Korea confirmed the Nortth Korean government statement which it picked up from the Korean Central News Agency (KCNA), the North Korean official news agency.

"The U.S. attempt to invade the DPRK (Democratic Peoples Republic of Korea) is getting evermore reckless," KCNA said in a signed commentary.

The U.S. Air Force says it deployed the 3 B-52 to Guam on Tuesday, largely because of the recent rhetoric coming out of North Korea. Pyongyang however believes the United States is preparing for a pre-emptive nuclear strike.

"The U.S. evermore undisguised reinforcement of the nuclear force goes to clearly prove that it is trying to make a preemptive nuclear strike at the DPRK a fait accompli," said the commentary.

Warning that it could strike first, North Korea said: "The right to make a preemptive nuclear strike is not the monopoly of the U.S."

"The DPRK revolutionary armed forces switched from their existing mode of military counter-action to the mode of a preemptive strike to cope with the enemy's ridiculous military hysteria to undermine its sovereignty and right to existence," the KCNA statement said. "All their operational groups are fully ready to deal a merciless and annihilating blow to the enemy if they make even the slightest provocation," it added.

Saturday's developments coincide with an acceleration of conscription in North Korea. The government has introduced a new recruitment regulation which requires all men aged up to their mid-30s, who have dodged military service in the past, to now join up.

University students, factory workers, and men with families have been exempted in the past. They are now getting call-up notices to report for physical examinations.

U.S. urges all citizens to avoid travel to North Korea