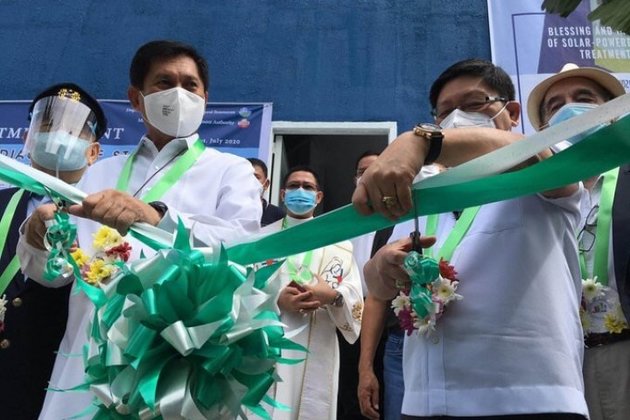 QUEZON CITY, July 31 (PIA) -- More than a year after the Manila Bay rehabilitation was launched, the Department of Environment and Natural Resources (DENR) unveiled on July 30, a solar-powered sewage treatment plant (STP) adjacent to the Manila Yacht Club along Roxas Boulevard in Manila.

The solar-powered STP, which aims to address the problem with household wastewater discharge that contributes to the pollution in Manila Bay, is capable of treating 500,000 liters of wastewater per day from three major drainage outfalls along Roxas Boulevard, according to DENR.

The DENR installed 1.5-kilometer-long rubber pipe from the US Embassy to the Manila Yacht Club to divert untreated wastewater from outfalls in Padre Faura, Rajah Soliman/Remedios across Aristocrat Restaurant, and Manila Yacht Club.

Meanwhile, the newly inaugurated STP will then process and treat the domestic wastewater before it will be discharged to Manila Bay.

The Duterte administration has allocated Php4.7 billion to expedite the rehabilitation and restoration of the Manila Bay coastal and marine ecosystem within seven years.

The DENR targets to restore the quality of waters of Manila Bay to Class SB, which is identified as Fishery Water Class II, Tourism Zone, and Recreational Water Class I.

Prior to the rehabilitation, however, the DENR water quality test showed that the fecal coliform level in Manila Bay was at 330 million MPN/100mL.

Once rehabilitated, Manila Bay should be suitable for propagation of shellfish and a spawning area for milkfish. It should cater to eco-tourism and be intended for different forms of contact recreation such as swimming, skin-diving, and the likes. --(CPC/PIA-IDPD)