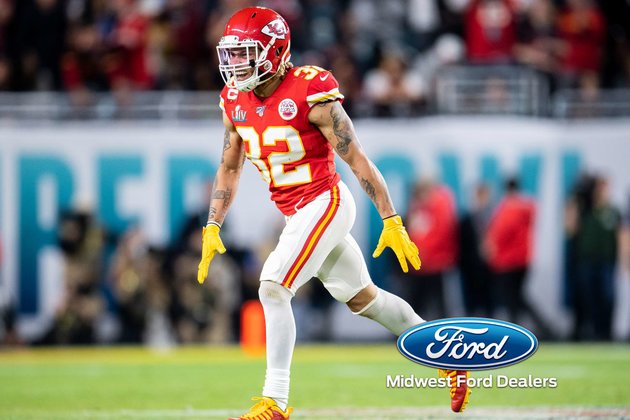 Training Camp is officially underway for the Kansas City Chiefs as veteran players reported to The University of Kansas Health System Training Complex this week in anticipation of the upcoming campaign. The focus right now is on strength and conditioning as part of a "ramp up" period before the players return to the field.

It should be noted that camp is taking place under a strict set of safety protocols meant to combat the COVID-19 pandemic, many of which Chiefs Vice President of Sports Medicine and Performance Rick Burkholder explained last week. For more on those procedures, click here.

As for what took place on Thursday, a group consisting of tight end Travis Kelce, safety Tyrann Mathieu, linebacker Anthony Hitchens and offensive tackle Mitchell Schwartz spoke with the media via web call to discuss camp and the 2020 season.

Here's a roundup of what was said.

1. Kelce shared his initial thoughts on the health and safety protocols in place at the practice facility and at Arrowhead Stadium.

"The Chiefs have done an unbelievable job as an organization getting us set up here around our facilities where we're comfortable and we're familiar with it," Kelce said. "Obviously, I love St. Joe. To everybody out there, we're going to miss you guys this year and, hopefully, we can get back out next year. But for what we have with the setup here in Kansas City at the two facilities - both the stadium and here at the practice facility - I think it's a very safe environment and I feel as comfortable as can be going into training camp."

2. And when the players are away from the facility, Kelce is confident the leadership in the locker room will mandate the importance of acting responsibly.

"It's accountability. The guys coming in this office know what this team is capable of. It shows in what we did last year and who all we have coming back. We have just about every single leader that we had in this locker room outside of two that respectively decided to opt out. I think we're as set and ready leadership-wise as we've ever been," Kelce said. "The tone has to be set and the accountability has to be set amongst all the guys in the locker room that there's a virus out here and it's not something we can play around with. It's something that we have to take seriously. Guys are going home to their families. We have kids, wives and beautiful families and we have to make sure that we're all being held accountable. So, like Coach Reid said, just make sure that you're doing the right things for the guys around you. I don't see much of a problem because a lot of that is already set in the culture that Coach Reid and the leaders on this team have set."

3. Mathieu, meanwhile, was asked how he and the other leaders in the locker room will ensure that the Chiefs stay hungry for another title.

"I think it just starts with guys like [quarterback] Patrick [Mahomes], myself and [defensive end] Frank Clark just setting the tempo. I'm extremely motivated. I feel like there's so much more that we can really achieve on an individual level and on a team level," Mathieu said. "I feel like defensively, we still aren't talked about in the breath that I would like, so I'm extremely motivated to keep my guys chipping away at it. We're constantly trying to set a standard that everybody's going to respect, so I'm hoping some of the young guys we added and some of the veterans we've added can kind of help bring that swagger to the room."

As much acclaim as the offense deservingly receives, Kansas City's defense was the top unit in the NFL by a number of statistical measures in 2019 over the final six games of the regular season. The Chiefs allowed the fewest points-per-game (11.5), the fewest touchdowns (7), the second-fewest rushing yards (570) and the lowest passer rating against (63.5) in the NFL in that span all while helping Kansas City to victories in each contest.

Based on Thursday's presser, Mathieu is determined to keep that momentum rolling into 2020.

4. Speaking of the defense, Hitchens explained how that group can still properly prepare for the season and continue to excel as a unit despite limited contact in practice

"I think there are a lot of different ways. Going into my seventh year now, there are a lot of different ways you can get ready for a game without throwing your body and hitting people in practice," Hitchens explained. "It starts in the meeting room, with walk throughs and just with repetition. That's how we got better last year - we got to practice early and we did walk throughs. You can see a lot in slow motion - you don't have to be going a hundred miles-per-hour to get better - and I think that's what we did last year. We took the pads off early but we got better as a team, so Coach Reid is doing a good job of putting our schedule together and getting us ready. He's been around for a long time, so we're just going to listen to him and go from there."

5. Lastly, Schwartz wrapped things up by expressing his confidence in some of the newest members of the offensive line - particularly veterans Kelechi Osemele and Mike Remmers - and how they can fit in early on up front despite the lack of any organized practices this offseason.

The Chiefs signed Osemele - a veteran guard - earlier this week and Remmers, who has experience at both tackle and guard sports, earlier this offseason.

"You don't necessarily get the feel for things until you're in pads anyways, and I'm pretty sure we have as many padded practices [at camp] as we normally would. They might not all be the same length as they used to be - whether that's COVID-19 or the new CBA rules - but I think we're going to have a pretty good amount of practice," Schwartz said. "Honestly, with the older guys, I think that the longer they've played, the easier it is to mesh them together. Obviously, [Osemele] has had an awesome career and Remmers has, too. Those are guys who understand how to play with people and next to people. That's something that I'm not too worried about."

It's just one more step in the process, but for the first time in months, the Chiefs are back at the facility preparing for the upcoming season.