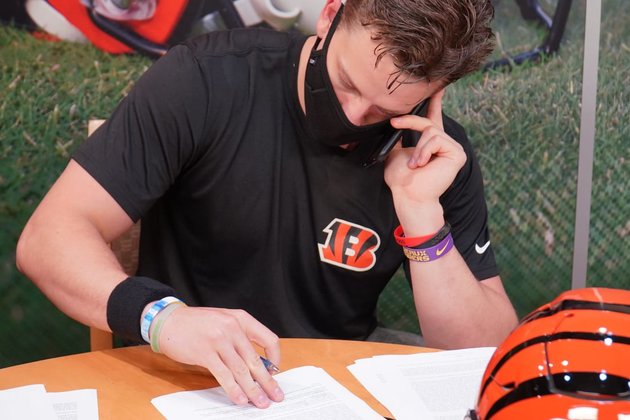 Dan Pitcher, who has been watching Joe Burrow for so long on a screen that it was as if he had become one of those well-worn TV character actors, didn't have to wait long.

Pitcher, the Bengals' first-year quarterbacks coach, got to work in person with Burrow for the first time Friday (not counting a few attaboys at the NFL scouting combine back in February) and you'd have to say he saw what he wanted to see.

"He's all ball. You know that," Pitcher said Friday afternoon.

And that's just how Burrow handled himself in front of the media on his first day at Paul Brown Stadium. Never mind Friday morning's walk-through, when he admitted he threw the ball just a little too hard.

"If it's one thing I try to stress to these guys," Pitcher said this week, "the rest of the building is going to follow your lead whether you like it or not and how you approach your job day to day and the type of urgency and effort and energy. It's OK to have fun, but to me you have to go out there with the enthusiasm and energy for your job and I think he really will and that's something I'm really looking forward to see."

Consider the tone set on Day One.

When he walked out of the tunnel and took the field for the first time wearing No. 9, the kid from Athens County and the son of a college coach punched a clock and not Instagram.

"It really didn't register to me as a moment," Burrow said in his first training camp Zoomer. "It was just coming to my first day of work. Going to the first walkthrough, I was more excited about finally getting on the field with my teammates and my coaches than savoring some moment that you're walking out of a tunnel. I was more excited about that."

As for the money, well there was plenty of that with the signing that reportedly gives him about $23 million guaranteed. But after buying a house two weeks ago on Cincinnati's eastern edge, that's about it. The house hunting, it seems, had been confined to the driveway of his old Ohio State buddy, Bengals right end Sam Hubbard, one of his new neighbors.

"I don't plan on spending any contract money," Burrow said. "I'm just going to live off the marketing money and let that accrue in my bank account."

Burrow, all 23 years old of him, admits he has a hard time getting his hands around the idea he's now a homeowner. Especially after spending almost all of this year in his parents' Athens, Ohio basement.

But he seems to have no problem owning the face of an NFL franchise in what basically amounts to his hometown.

"It's just football. It's just doing what I've always done," Burrow said. "Continue to work the way I've always worked. Obviously I'm not going to get complacent, because I haven't done anything yet so I'm going to work every day and be the hardest worker that I can lead my guys to the best of my ability."

(Which, by the way, Burrow says he had no idea the four exhibition games had been scrubbed: "I'm on a need to know basis right now. I'm coming to work every day and doing what I'm told.")

But that shouldn't be the question just yet. It should be much simpler than that.

Does he get it?

The offense? The role?

Pitcher has asked him enough questions and heard enough answers to realize he certainly knows the former.

"He's really sharp. He has excellent retention of information. His process is very fast," Pitcher said. "It's cliche, but he does see and understand the big picture of what a defense is trying to do. ... It does take time. It does take reps. It's that way for everybody It's not that it's not going to take him time, but he is just very well suited with his intelligence and his ability to see it and understand it. He'll learn fast."

And as for the latter, yeah, he gets the role, too. That was clear Friday when the topic of social justice surfaced and he didn't back down from his support for those looking for a change that he expressed at the height of the protests during the spring.

"I think people in our position have platforms to do a lot of good," Burrow said. "When there are people being marginalized or just injustices happening, I think it's great for people in the spotlight to help those kind of people. I've done what I can. It's tough when you are a rookie and you want to focus on ball, but you also have a responsibility to help as many people as you can."

It is that focus on ball that ended up in Burrow's conversation with Peyton Manning, his overall No. 1 Astroturf Ancestor from 1998. The '97 Cots went 3-13 (so did the '98 Colts) and although Manning didn't win the Heisman or the national championship at Tennessee like Burrow did at LSU, there are far more similarities. You can start with SEC championships, football families and brains and go from there.

They talked back in May and, well, you know Manning. It went for an hour.

"I couldn't have appreciated that more," Burrow said. "I felt like we were in very similar situations coming in and he felt the same. He just gave me a lot of different advice when it came to marketing, how to handle the huddle, how to handle coaches, how assertive to be in your first year and how you build on upon that. It was a great conversation that I was very glad to have."

All of it gets back to the kid walking out of the tunnel for the first time. He says he has had no time to reflect during a pandemic's frenetic pace. But on Friday, he did remember the kid from Athens.

For now, that's all the Bengals need to know. And if this had been a typical Friday night in training camp, Pitcher knows where he and Burrow would have been.

The office. On the white board.

"Right now there are restrictions when we can be in the building," Pitcher said. "But, believe me, we know he's doing everything he can."