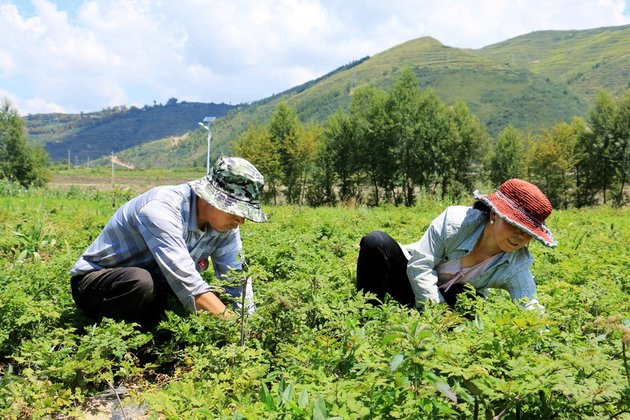 LANZHOU, Sept. 15 (Xinhua) -- The locals of northwest China's Minxian County can talk with some eloquence on the many uses of astragalus roots: Traditional Chinese medicine (TCM) practitioners prescribe them to boost immunity, chefs use them to flavor broth, and villagers living close to the herb farms allegedly never develop age spots.

In recent months, the medicinal material has pocketed two more laurels: it has been incorporated into many TCM therapies treating COVID-19, and has increasingly been used as an antidote to the county's perennial poverty.

"Apart from use as a medication, our herbs are increasingly consumed as tonic foods, because people have been paying more attention to their health since the epidemic," said Wang, referring to the Chinese habits of drinking herbal tea and seasoning broths with herbs.

Wang heads a farmers' cooperative that processes and sells local herbs. About 175 impoverished families from six villages rely on the cooperative to increase their incomes.

Earlier this year, the COVID-19 epidemic disrupted logistics nationwide, temporarily suppressing herb sales. However, with the easing of anti-virus restrictions, the county is optimistic that TCM's contribution to the fight against COVID-19, in combination with the rise in health awareness, will boost the local herb industry.

"Our sales of herbal products since May rose by 20 to 25 percent year on year," said Li Aijun, chair of Juhetai, a Minxian-based e-commerce company that mainly sells local herbs. "The consumer group is expanding amid increasing health awareness."

Deng Qiang, head of Chabu Town in Minxian, is also optimistic. "The Chinese government is placing greater focus on TCM and the public is increasingly health-savvy. This is good news for our efforts to lift more herb growers out of poverty," he said.

Minxian is one of the 52 Chinese counties yet to be delisted as a "poverty-stricken county." It is also one of the biggest producers of Angelica sinensis (female ginseng), astragalus root and Codonopsis pilosula (dangshen) in China. The herb industry generates over 60 percent of local incomes.

Photo shows a transaction at the trading center for female ginseng in Minxian County, Gansu Province, on Feb. 14, 2020. (photo provided by the Minxian government)

According to officials, local efforts to contain COVID-19 featured the heavy use of locally-produced herbs, which were made into preventative herbal teas and mind-soothing perfumed sachets, distributed among police officers, community workers and others employed on the anti-virus frontline.

"Local residents have a special feeling toward TCM, and they prefer herbal medicines in both the treatment and prevention of diseases," said Zhang Yan, an official with the health commission of the city of Dingxi, where Minxian County is situated.

"The early involvement of TCM has also proved crucial to the effective prevention and treatment of COVID-19, especially in poverty-ridden areas, where medical resources are limited," Zhang said.

Officials have long wished to enrich the impoverished county of Minxian through herb farming, which has been present in the area for over 1,000 years. But despite the expansion of land devoted to herb farming, the county has faced fierce competition from other herb-growing regions and price fluctuations in recent years.

The Minxian government has responded by building an industrial chain to retain more added value within the county.

In Wang's cooperative, local farmers process and pack herbs during the winter season, when they have little farm work. "This ensures extra income, in addition to the sale of raw herbs," Wang said.

Photo shows a transaction at the trading center for female ginseng in Minxian County, Gansu Province, on Feb. 14, 2020. (photo provided by the Minxian government)

Close to the cooperative, a factory produces honey that derives from dangshen and astragalus flowers. At full production capacity, it is expected to boost incomes for 12,000 needy families who grow herbs and keep bees.

Across Minxian, 140 companies have been set up to produce and sell TCM materials, and the industry is credited with improving the incomes of 161,700 farmers, according to the county government.

Wang Zaikai, deputy head of the publicity bureau of Dingxi, said the county's poverty-relief work will continue to draw strength from the industry, which is still in a primitive form.

"We need to take a step forward in industrialization and bring in deep processing, such as tablets and pills," Wang said.

The local government is in talks with pharmaceutical factories in coastal provinces to set up factories locally, the official said, although he admits the difficulties they face.

"Minxian boasts lower labor costs, but the challenge lies in bringing in management and technical personnel. After all, it is still hard to persuade a college graduate to work in a poor county." ■