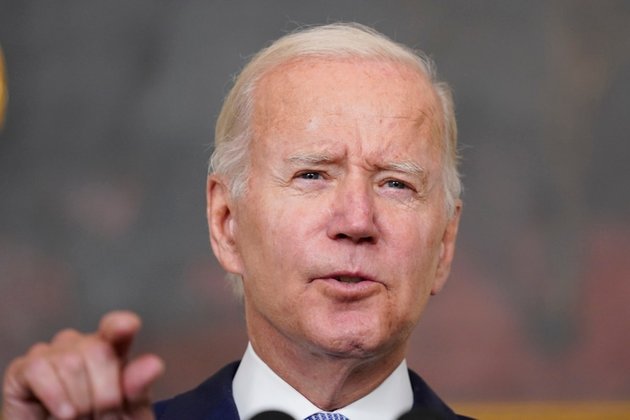 washington - The Biden administration on Thursday pushed Congress to pass its proposed $260 billion Inflation Reduction Act, which the White House says will "lower costs, reduce inflation, and address a range of critical and long-standing economic challenges."

"My message to Congress is this: Listen to the American people," Biden said during a virtual roundtable of U.S. business leaders. "This is the strongest bill you can pass to lower inflation, continue to cut the deficit, reduce health care costs, tackle the climate crisis and promote America's energy security, all while reducing the burdens facing working-class and middle-class families."

Economists, politicians and ordinary consumers alike agree that rising prices are a problem - U.S. inflation hit 9.1% in June, according to the U.S. Bureau of Labor Statistics. Food price hikes are especially painful for many American families: In the past year those have risen, on average, by about 10%, the highest yearly increase in more than 40 years.

What few can agree on, however, is what needs to be done to bring it back down.

Biden's supporters say the act will raise government revenues by $313 billion by imposing a 15 percent minimum corporate tax - a move that will affect some of the nation's wealthiest companies, especially those that paid nothing in federal corporate income taxes on their profits in 2020.

FILE - A prescription is filled at Pucci's Pharmacy in Sacramento, Calif., July 8, 2016.

It will also reform prescription drug pricing, which the administration estimates will save the federal government $288 billion a year. The act also invests more than $400 billion in energy security, climate change mitigation and health care.

The country's largest union umbrella group, the American Federation of Labor and Congress of Industrial Organizations, supports the act, its president said Thursday during the roundtable with Biden.

"I'm bringing the voice of our 57 unions, 12.5 million members, who believe this bill is going to help us reshape the future and deliver real help to working families by reducing rising energy and health care costs," said AFL-CIO President Liz Shuler. "This is going to deliver fundamental economic change across America."

But some economists are not so sure.

A study from the Penn Wharton Budget Model predicts the act would have little impact on inflation, forecasting prices would slightly increase for another two years and then fall.

The Committee for a Responsible Federal Budget reached the opposite conclusion, saying that the act would "very modestly reduce inflationary pressures in the near term while lowering the risk of persistent inflation over time."

Economist Steve H. Hanke, a professor of applied economics at Johns Hopkins University and founder and co-director of the university's Institute for Applied Economics, Global Health, and the Study of Business Enterprise, said Thursday that the act is "ill-conceived" and involves the one thing that people seem to dislike more than rising prices: taxes.

"The idea it's going to do anything with inflation is ridiculous," he said Thursday during a seminar with the Jewish Policy Center. "It will change the relative prices of different things - exactly how, I don't know, because I haven't gone through the 10,000-page thing. And it looks to me like it's a tax increase bill."

A Senate vote on the legislation in the next few days appeared more likely late Thursday. Democrats said they had reached an agreement on some changes to the bill, clearing a path for its consideration by the chamber.

Senator Kyrsten Sinema, an Arizona Democrat who was seen as the pivotal vote, said in a statement that she had agreed to changes in the measure's tax and energy provisions. Senate Majority Leader Chuck Schumer, a New York Democrat, said he believed the compromise 'will receive the support' of all Democrats in the chamber. The party needs unanimity to succeed in the 50-50 Senate, along with Vice President Kamala Harris' tiebreaking vote.

Schumer has said he hopes the Senate can begin voting on the bill Saturday. Passage by the House, which Democrats control, could come next week.

Some information for this report came from The Associated Press.