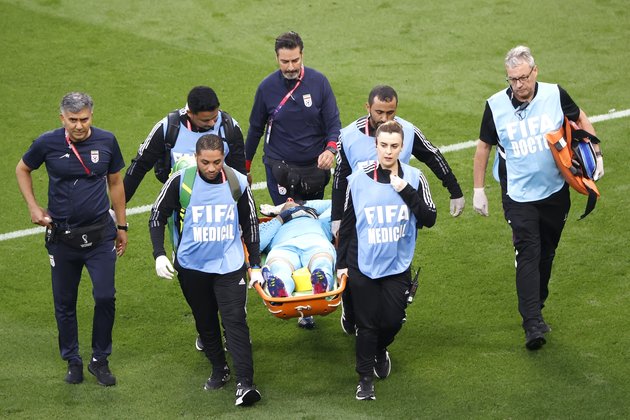 In the eighth minute of their Fifa men's World Cup match against England, Iranian goalkeeper Alireza Beiranvand collided face-first with a teammate. The clash left the keeper bloodied, unsteady on his feet, and apparently disoriented - in no state to play.

But after lengthy treatment he played on. Within minutes he had fallen to the floor and was carried off on a stretcher. He was later taken to hospital.

Former England player, Jermaine Jenas, who was commentating on the match, said the situation was "ridiculous" and "out of order". Given the serious nature of Beiranvand's injury, medical knowledge suggests he should have been taken off the pitch immediately.

But he allegedly refused to do so, according to some reports, most likely because he knew that if he did go off, he wouldn't be able to take part in the rest of the game. This highlights a problem with Fifa's concussion protocols that is arguably putting players' lives at risk.

A blow to the head, as Beiranvand took, or a blow to the body that causes the head and brain to move back and forth rapidly can cause concussion, which is a type of brain injury. It's not something that can be run off or played through, and attempting to do so is not a sign of toughness.

Playing with a concussion is extremely dangerous - especially so if a player hits their head again. Sustaining a second brain injury before recovering from an earlier one can result in what's known as second impact syndrome.

This happens when the brain swells rapidly after a person suffers a second head injury while symptoms from an earlier head injury or concussion are still present. And it can often be fatal.

Read more: Football and dementia: heading must be banned until the age of 18

Repeated head impacts - for instance heading a football many times - can also lead to neurodegenerative diseases such as dementia or chronic traumatic encephalopathy.

This is the first Fifa men's World Cup to allow concussion substitutions. Teams can make an extra substitution if a player suffers or is suspected to have suffered a concussion.

Every game also has a "concussion spotter". This is a member of the medical team who sits in the stands with access to video replays and whose job it is to identify possible brain injuries. Concussion spotters have been used at rugby union fixtures and in the NFL for some time.

Fifa's medical concussion protocol indicates that after an initial (on-pitch) examination an off-pitch or quiet-area examination should follow. This step is vital and the need for it to be conducted in quiet is important. It also takes considerable time, particularly as signs and symptoms of concussion can be delayed - sometimes not appearing for up to three weeks.

Yet while Fifa emphasises the need for off-field assessment, it does not allow players to be temporarily removed to allow a full assessment in a quiet environment. And because coaches want their best players on the pitch, athletes are often pressured to play through injuries and are heroised for doing so.

Team doctors have even been abused by managers for treating injured players and there are also stories of players being coached on how to "cheat" concussion tests so they can remain on the pitch.

Earlier this year, an open letter called on the International Football Association Board (IFAB), which determines the game's rules, to allow temporary concussion substitutions. It was signed by former players, leading scientists, advocates and the family of former players. IFAB rejected this call.

As a co-founder of the Acquired Brain Injury Research Network, I believe this decision is wrong, and the rules need to be changed to allow players to be temporarily substituted from play for assessment. Knowing that the substitution is not permanent removes some of the pressure on players to stay on regardless of their condition. And away from the field of play, a more suitable and thorough assessment can then take place, meaning the player can return if they are fit to do so.

Fifa responded to these allegations saying:

How to spot concussion

While football's attitude towards concussion has improved, results are still put above the health of players. Ultimately, the decision to play on should not be in the hands of players or anyone associated with the team.

There has been widespread media criticism of the handling of Beiranvand's injury. This is a positive change as previously reporting was full of misconceptions, incorrect information and worrying attitudes - particularly from former players. But there is still much confusion over concussion.

Each concussion is experienced differently so they can be hard to identify, but there are things that everyone can look out for. The symptoms of having a concussion include a headache or dizziness, memory loss, sleep symptoms and emotional symptoms such as anxiety.

There are also visible signs that anyone watching may be able to spot. Following the phrase "If in doubt, sit them out" may save a person's life. A player should be taken out of the game and medical attention sought if any of these are seen:

Alireza Beiranvand's injury adds to a growing list of players that have remained in matches after a brain injury. Here's hoping this is a wake-up call for Fifa and the International Football Association Board, because the current rules do not appear to be protecting players.