Russia amps up missile strikes in Ukraine, killing 15 in Kherson 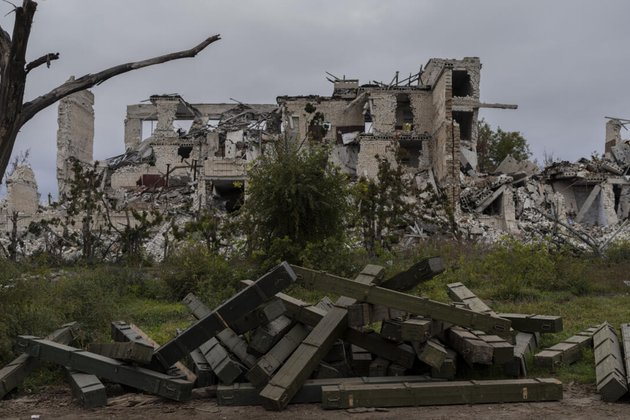 Russian strikes on Ukraine this week have left half of Kyiv without electricity, amid cold winter temperatures. In the recently recaptured city of Kherson, 15 civilians died following Russian shelling, according to a city official. Read our blog to see how the day's events unfolded. All times are Paris time (GMT+1).

This live blog is no longer being updated. For all of our coverage of the war in Ukraine, click here.

In a rare public spat involving Ukrainian leaders, President Volodymyr Zelensky on Friday criticised the mayor of Kyiv for doing what he said was a poor job setting up emergency shelters to help those without power and heat after Russian attacks. In the wake of crushing Russian missile strikes against the power-generating system, Ukraine has established thousands of so-called "invincibility centres" where people can access heat, water, internet and mobile phone links.

In an evening address, Zelenskiy indicated that Kyiv Mayor Vitali Klitschko and his officials had not done enough to help.

"Unfortunately, local authorities have not performed well in all cities. In particular, there are a lot of complaints in Kyiv... To put it mildly, more work is needed," he said, saying the level of services available in many Kyiv centres was not good enough.

Germany and France pledged Friday to provide each other mutual support in preventing a possible energy crisis after supplies from Russia dried up amid the war in Ukraine.

As part of a joint agreement signed by German Chancellor Olaf Scholz and French Prime Minister Elisabeth Borne, Germany will provide France with electricity while getting much-needed natural gas in return.

"Friends help each other in need," Scholz said after the signing ceremony in Berlin.

Borne echoed that sentiment, saying the friendship between the two European heavyweight was crucial. "It has already proved it can withstand tests and master many challenges," she said.

Ukraine's President Volodymyr Zelensky said Friday that over six million households in the country had been affected by power cuts, two days after targeted Russian strikes on Ukraine's energy infrastructure.

"As of this evening, blackouts continue in most regions (of Ukraine) and in Kyiv. In total, more than six million subscribers," Zelensky said in his daily address on social media.

Russian shelling on the southern Ukrainian city of Kherson killed 15 civilians on Friday, said an official in the recently recaptured city.

"Today, 15 Kherson city residents were killed and 35 injured, including one child, as a result of enemy shelling," Galyna Lugova said on social media. "Several private houses and high-rise buildings were damaged" in the attacks," she added.

Zelensky made the comments in a Twitter post but did not give details. He also said he had thanked von der Leyen for starting work on a fresh sanctions package against Russia.

Moscow said Friday that a resolution approved by the European Parliament to recognise Russia as a "state sponsor of terrorism" over its military action in Ukraine has "nothing to do" with the fight against terror.

This "has nothing to do with the real situation in the fight against international terrorism", Russia's foreign ministry said in a statement, calling the resolution an " unfriendly step" and part of a "campaign carried out by the West against our country".

The facilities were all disconnected from the grid on Wednesday for the first time in Ukrainian history after the latest wave of Russian air strikes on vital infrastructure.

In a statement, the IAEA nuclear watchdog said Ukraine had informed it on Friday that its Rivne, South Ukraine and Khmelnytskyy plants had been reconnected. Ukraine reconnected its vast Zaporizhzhia plant on Thursday, Kyiv said earlier.

The Zaporizhzhia plant, which was seized by Russia in the early phase of its Feb. 24 invasion, was shut down in September, but still needs electricity to keep up essential safety work.

The European Union will step up efforts to provide Ukraine with support to restore and maintain power and heating, the head of the European Commission said on Friday, after a new wave of Russian missile attacks on critical Ukrainian infrastructure.

Commission head Ursula von der Leyen said in a statement after a phone call with Ukraine's President Volodymyr Zelensky the EU executive arm was preparing to deliver large donations to Ukraine from EU countries and from the Commission's reserves.

Millions of Ukrainians were still without heat or power on Friday after the most devastating Russian air strikes on its energy grid so far, with residents warned to brace for further attacks and stock up on water, food and warm clothing.

5:03pm: Half of Kyiv still without power following Russian strikes

Nearly half of Kyiv residents were still without electricity on Friday as engineers battled to restore services two days after Russian strikes hammered the country's energy grid.

Millions of Ukrainians have endured the cold without power since Russia fired dozens of missiles and launched drone attacks at water and electricity facilities on Wednesday.

"Yes, this is a difficult situation and yes, it can happen again," presidential advisor Mykhailo Podolyak said on television.

"But Ukraine can cope."

President Vladimir Putin on Friday told a group of mothers of soldiers fighting in Ukraine that Russia will achieve the goals of its military campaign in the country.

"We must achieve our goals and we will achieve them in the end," Putin said during the televised meeting at his residence near Moscow. He also denounced what he called attempts by "the enemy... in the information sphere" to "devalue, (and) compromise" Moscow's tactics in Ukraine.

European government representatives will resume talks over the level of a price cap on Russian oil on Friday evening, a diplomat told Reuters. The diplomat, who declined to be identified, said it was not clear at present how much positions have converged.

On Thursday, European Union governments remained split over the level at which to cap Russian oil prices to curb Moscow's ability to pay for its war in Ukraine without causing a global oil supply shock.

Russian President Vladimir Putin met mothers of soldiers fighting in Ukraine on Friday and told them not to believe everything they see on TV or read on the internet since there were many "fakes" circulating.

In a pre-recorded meeting broadcast on state television, Putin also said Russia's leaders understood and shared the pain of those who had lost loved ones fighting in Ukraine. He vowed he would not forget the incomparable suffering of mothers who had lost sons in the nine-month-old conflict. Russia still calls the war in Ukraine a "special military operation".

Hundreds of thousands of Russian soldiers have been sent to fight in Ukraine, including some of the more than 300,000 reservists who were called up as part of a mobilisation announced by Putin in September.

The mothers listened to Putin's remarks but their own comments to the president were not immediately shown in the recorded clip.

The UN human rights chief said on Thursday that Russian strikes on critical infrastructure in Ukraine since October had killed at least 77 civilians and were plunging millions of people into extreme hardship.

"Millions are being plunged into extreme hardship and appalling conditions of life by these strikes," said Volker Turk in a statement. "Taken as a whole, this raises serious problems under international humanitarian law, which requires a concrete and direct military advantage for each object attacked."

In the same statement, he said the UN's preliminary analysis of videos that appeared to show Ukrainian soldiers executing Russian prisoners of war indicated they were "highly likely to be authentic".

10:45am: NATO chief says up to member states to decide Patriot deployment

The decision whether to send Patriot air defence units to Ukraine lies with the specific nations, said NATO Secretary-General Jens Stoltenberg when asked about Poland's demands for Germany to pass on Patriot units to Kyiv.

Germany however made it clear that the air defence units it offered to Poland were intended for use on NATO territory.

Speaking to reporters in Brussels, Stoltenberg said the decisions over specific systems are national decisions, adding that end user agreements and other arrangements sometimes meant that consultations with other allies were required.

The Patriot system is produced by US company Raytheon.

Ukraine's President Volodymyr Zelensky on Friday called on Europeans to remain united against Russia's war as he addressed a conference in Lithuania.

"There is no split, there is no schism among Europeans and we have to preserve this. This is our mission number one this year," Zelensky said via video link.

7:39am: Power cuts cause 'huge headaches' for business owners

7:12am: More than 15,000 missing due to the war in Ukraine, says intergovernmental organisation

More than 15,000 people have gone missing during the war in Ukraine, an official in the Kyiv office of the Hague-based International Commission on Missing Persons (ICMP) said.

The ICMP's programme director for Europe, Matthew Holliday, said it was unclear how many people had been forcibly transferred, were being held in detention in Russia, were alive and separated from family members, or had died and been buried in makeshift graves.

The World Bank in August estimated it would take $105 billion to repair Ukraine's physical infrastructure but Marchenko said the figure was rising.

Marchenko added current Western support meant "we'll have approximately $3 to 3.5 billion a month vs $5 billion this year," which should be enough to keep the government running.

Some senior European officials have estimated it is likely to cost more than one trillion euros to rebuild Ukraine after the war, which on Thursday entered its tenth month.

British foreign minister James Cleverly will pledge millions of pounds in further support for Kyiv during a visit to Ukraine to ensure the country has the practical help it needs through the winter, his office said.

Cleverly, who is set to meet President Volodymyr Zelensky and Foreign Minister Dmytro Kuleba on the trip, also condemned Russia for its "brutal attacks" on civilians, hospitals and energy infrastructure.

"The UK stands shoulder to shoulder with Ukraine," said Cleverly, as he set out 3 million pounds to help rebuild vital infrastructure and committed another 5 million for a Ukraine-led initiative to ship grain to countries at risk of famine.