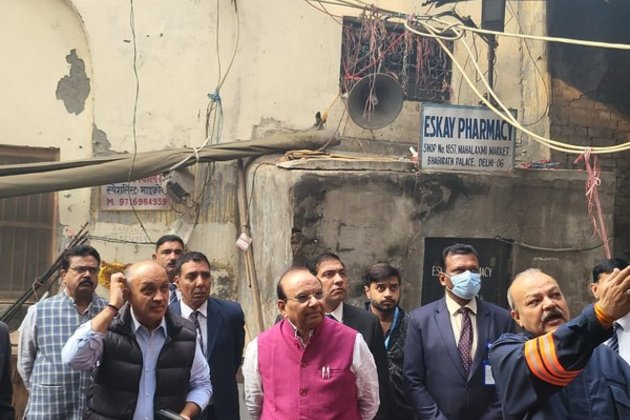 New Delhi [India], November 26 (ANI): Delhi Lieutenant Governor VK Saxena on Saturday visited the Bhagirath Palace market in Chandni Chowk where work is still underway on the fire that broke out on the night of 24 November.

More than 150 shops and godowns have come under the grip of this fire and more than 100 fire tenders are engaged in extinguishing the fire, informed the Fire Department.

According to the fire department, the call regarding the fire was received at 9:19 pm on Thursday following which the fire tenders were rushed to the spot.

The fire department also said that smoke is still clearly visible from inside and the shops inside are mostly electrical and there are warehouses stocked with electrical goods.

The LG has further constituted a multi-disciplinary committee to look into the matter and submit a report within 30 days.

"Have constituted a multi-disciplinary Committee to look into ways and means of effectively addressing these issues with the active involvement of residents and other stakeholders, in areas like Chandni Chowk, Sadar Bazar, Pahar Ganj, etc and submit a report within 30 days," tweeted LG VK Saxena.

Earlier on November 25, a massive blaze that broke out in the shops of Bhagirath Palace market of Chandni Chowk in the national capital last evening continued to rage on Friday morning as attempts were underway to bring the flames under control.

According to Delhi Fire Service Director Atul Garg, several fire tenders are on the spot and attempts are on to douse the fire. No casualty has been reported so far.

In the early hours of Friday, the official said that the "situation is not very good" while also informing that a major part of the building has been damaged.

"The situation is not very good as of now. 40 fire tenders are present at the spot. The fire will be brought under control by morning. No casualties have been reported so far. A major part of the building has been damaged," said Atul Garg, Delhi Fire Service Director.

Former Health Minister Dr Harsh Vardhan who visited the site in the early hours of Friday said that the main building that caught fire was collapsing slowly as two floors were completely damaged. (ANI)